In the passing showcase, between the cloister of the Church and the knoll there is one of the most engaging models: The mazzolatura of the conspirators. 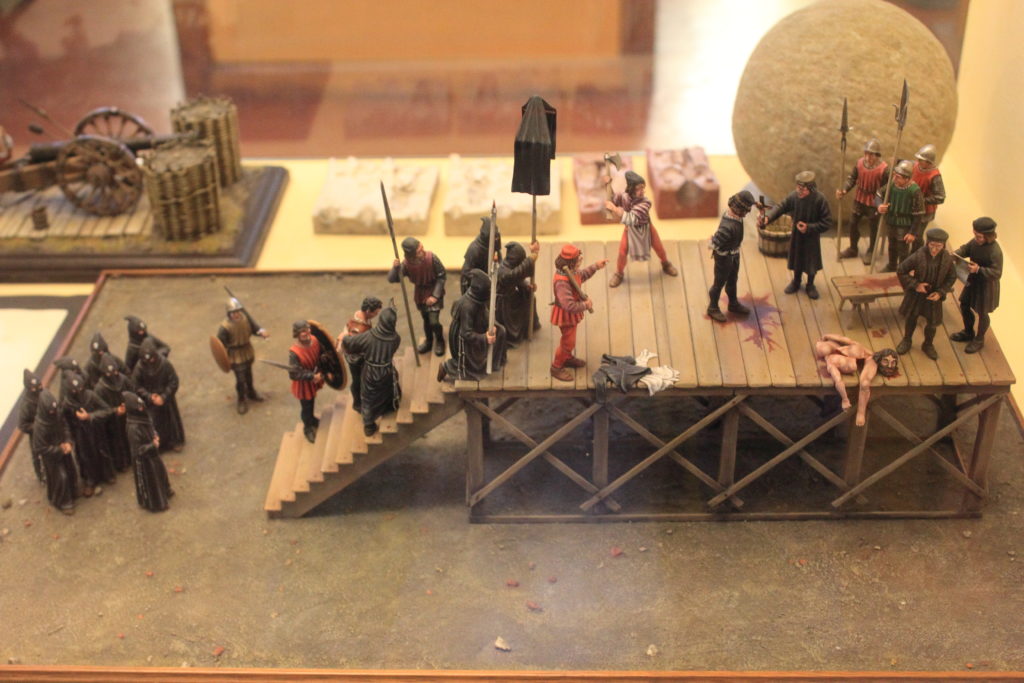 The model is based on a miniature dating back to that age. It is worth remembering that the art of miniature was one of the most important creative expressions of Ferrara.

On the scaffold, the first one of the condemned conspirators has already been executed and cut into four parts, while the other is going to be “coppato”. The friars of the order of good death are taking a third convict to be executed.

The episode here represented took place on the 25th of January, 1505. Alfonso D’Este was going to make his vow to take the reins of the Estense government after the death of his father Ercole, and he was accompanied by his brother, cardinal Ippolito.

Ferrante, Alfonso’s ambitious youngest brother, longed for the office his brother was taking and, to achieve his ambition, put together a group of assassins that included their other brother Giulio, some mercenaries and other miscreants of various social class.

Ippolito immediately discovered his brother’s intrigue which, of course, failed miserably. After the subsequent trial, the conspirators who were not members of the Este family were sentenced to death while Giulio and Ferrante were sentenced to life imprisonment.

In 1540 Ferrante died, while Giulio was pardoned after 53 years in prison. Chronicles of the time tell us that when this eighty-two-year-old man got out of prison wearing the same clothes he wore when he was arrested, the people of Ferrara were very intrigued by this subject wearing clothes so… out of fashion.

Next to the mural painting representing a hillock overlooking a valley, you can see a section of the walls of Ferrara, a work by Biagio Rossetti. Today, it is not easy to identify this section given that they were originally plastered in white and castellated.

Nowadays, those walls represented in the diorama can be seen in the area of ​​the Parco Urbano and include the monument which is erroneously known as “La Casa del Boia” (in English lit. The executioner’s home) which was actually one of the watch towers of the walls.

In the center of the room you can admire one of the largest models made by the museum’s members. It represents the fourteenth-century Estensi walls which no longer exists, given that they have been replaced by those designed by Biagio Rossetti. The section shown by the model was once where today you can see San Pietro gate.

This model is undoubtedly our most important work. The bricks you see, for example, were created and laid one by one. Its creation began more than thirty years ago and has not been completed yet, as new details are added periodically.

In the center of the cloister, with its characteristic ceiling that recalls the medieval period and the crests of the Estense family, you can admire a diorama that reproduces the eighteenth-century watchtower, still visible in the Bastion of S. Giorgio in Ferrara, at the entrance to Via Marco Polo.

The diorama that you can admire behind the previous one reproduces an episode of the hunting expedition that took place on April 25th,1494, and depicts the Duke Ercole d’Este talking to Guizzardo Riminaldo, the head of his guard’s crossbowmen, during a break.

At the end of the fifteenth century, ruling lords considered hunting the best way to cement and make political alliances and for this reason they used to invite to their hunting expeditions illustrious figures. The Gonzagas were, of course, regulars at the hunting expeditions organized by the Este family. Inviting prestigious guests to hunt also became a way to show their authority over the territory and their subjects.

At the end of the fifteenth century, with the return of the French to Italy, to the Duchy of Milan, hunting expeditions became a way to establish a sort of pact directly with the French sovereign. Indeed, although the Estense family had established a variety of agreements with the Duchy of Milan, Ercole d’Este thought that it might have tried to impede the development of any good relationship between the French and the Estensi themselves.

On April 24th, 1294, Monsignor Bonino, ambassador of the King of France, arrived in Ferrara, welcomed by the Duke Ercole, with all his court in tow.

The “Barco” mentioned in the extract is the park that surrounded the Delizia Estense of Belfiore, which is no longer existing

During Ercole I d’Este’s rule, the building underwent considerable transformations and the territory surrounding the residence was considerably expanded to the detriment of the population that had its houses expropriated and replaced by a large hunting reserve which would have housed also wild beasts like lions or leopards

This large park – the Barco – was delimited by a wall and housed, along with the residence of the duke, also a large vegetable garden and arable lands and buildings used as houses for those who worked in the cultivable lands. It was in this vast forest, which stretched almost to the banks of the Po, that the Este lords went hunting in company of their guests.

In the showcase you can admire a curious model: a diorama of Pope John XXIII’s visit to Ferrara.

It is not the famous Pope Roncalli we are talking about, but the antipope Baldassarre Cossa, elected at a time when, among Avignonians, Romans and antipopes there was a huge number of successors of Peter.

As said before, this diorama depicts the visit to Ferrara of John XXIII, which took place on February 18th, 1414, after being invited by Nicolò D’Este, his great supporter, who personally led, together with Uguccione dei Contrari, the mule that carried the pontiff from  the Monastery of S. Antonio in Polesine, along via dei Sabbioni (now Via Porta S. Pietro, Via Saraceno, Via Mazzini) and then up to the Duomo (Vescovado).At the time, the event did not arouse great interest among the population as shown in the diorama itself, where the author has depicted very few Ferraresi (Ferrara’s inhabitants) with an astonished look.

The two rooms, the medieval cloister and the hillock, have a long series of windows on the walls that host one of the largest collections of military figures currently visible to the public. The collection covers every historical period, starting from the Roman Empire to the wars of the twentieth century, and it also covers all regions, from Europe to the Americas and finally the Far East.

The pieces on display range from those that are particularly refined to those called “toys”, which are more like toys for kids than collectibles. However, behind every model there is always a historical research that makes it a faithful reproduction.