In this room, as the ceiling in the shape of an upturned ship’s frame may suggest you, we display a large collection of both real and imaginative means that men have been creating during his whole existence to face water. 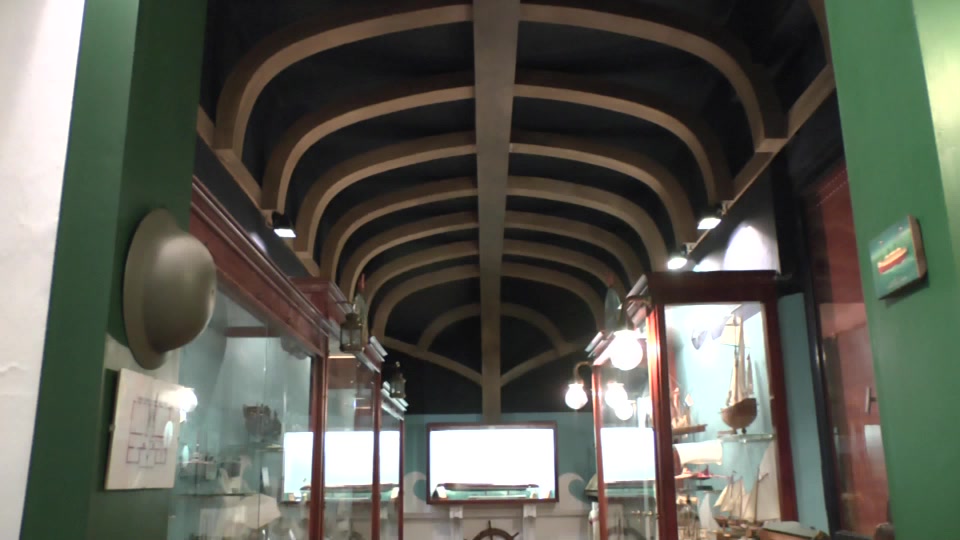 In this collection you can see some models from places and eras often unknown to most people. At least at our latitudes…

In the first showcase, you can admire one of the most important works of the museum, the result of long historical research. 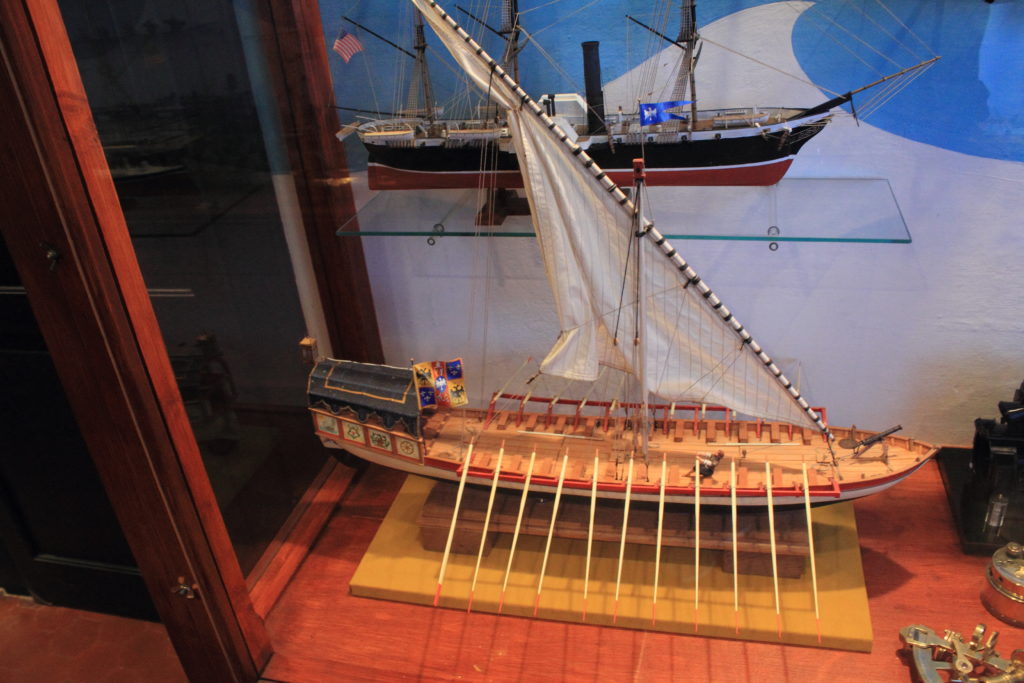 It is the river boat with which the Estensi moved along the navigable rivers, in particular when they sailed to Mantua to visit the Gonzagas, with whom they had close relationships.

This was a sail ship with little draught and rowing, and it was pulled by animals on the river’s banks

The boat had on its sides some paintings by Girolamo da Carpi representing “the Exploits” of the Estense family. As shown in the writings we found at Ferrara’s Ariostea library,  the painter periodically retouched his works that the water and the not-so-delicate maintenance of the sailors damaged. 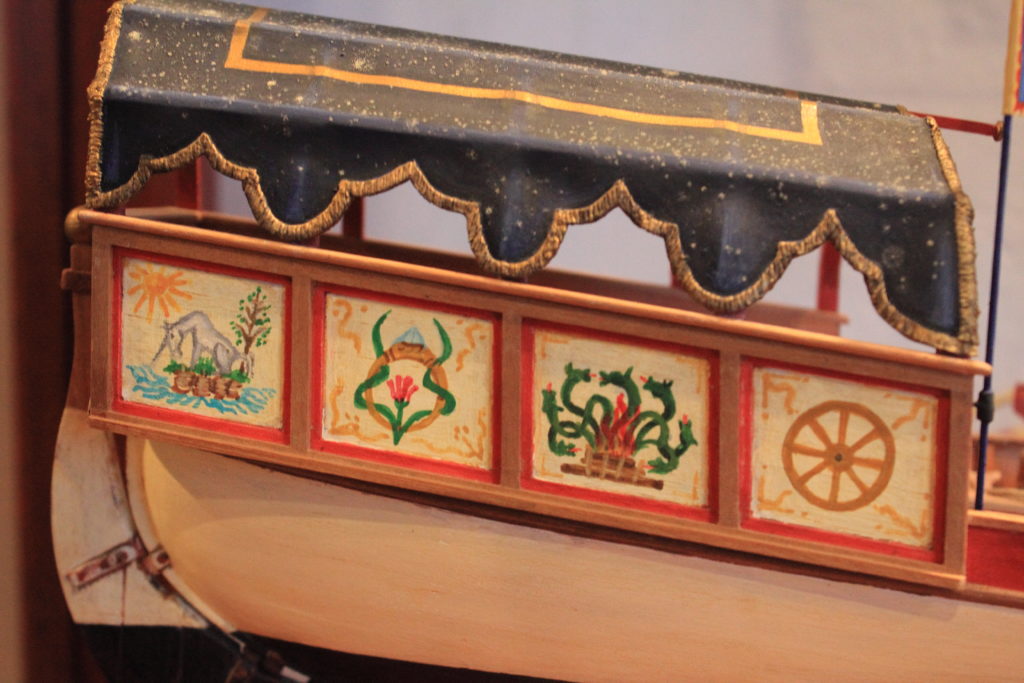 On the opposite side you can find the classic Disney version of the Nautilus, the famous submarine of the legendary Captain Nemo and next to it, Captain Nemo himself in his extraordinary underwater suit and his electric gun. 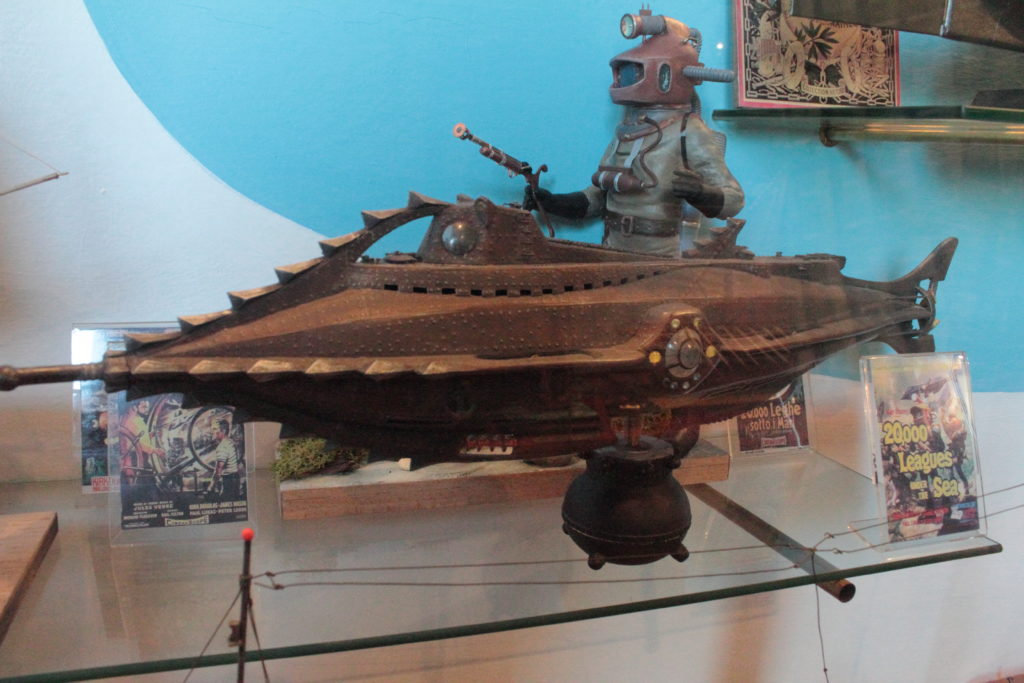 Next to it, you will find an even more particular model, the flying ship of Robur the conqueror, from another novel by the great Verne.

The model was built by museum members who followed the detailed description the author provides in his work. It was a flying ship propelled by innumerable propellers hoisted on high supports. At the time Jules Verne with the adventures of Robur had sided with those who argued that the future of flight lied in those means heavier than air (airplanes) than in those lighter (balloons).

Interesting is the presence of models of the first attempted submarines:

From Fulton’s submarine, which dates back to the late XVIII century and which was pushed to the surface by an unusual bat-wing sail and manually immersed 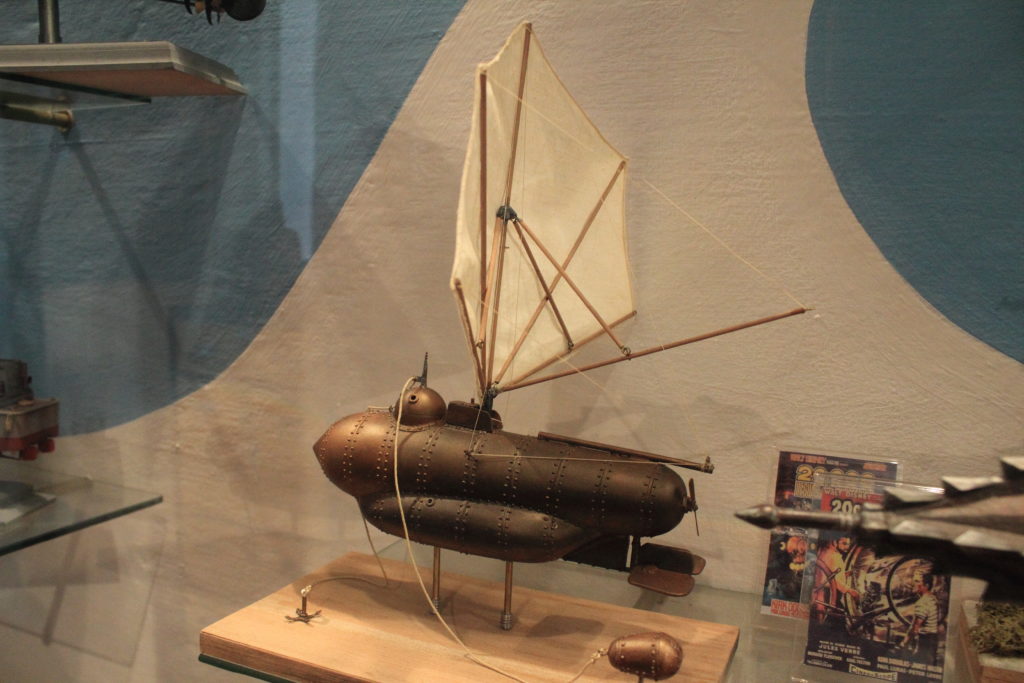 to the Turtle, a kind of underwater barrel also thrust by a crank and completed with a bomb.

History tells us that during the American War of Independence a poor sailor pedaled under the enemy ship onboard of the Turtle, but when he tried to fasten the bomb to the ship with some sort of corkscrew he couldn’t do it because of the copper armor. For this reason, the poor sailor, very demoralized, had to give up on his mission and go back to his base. You will find more information on these events in the second part of the printed guide.

Admire now the ships used during the American Civil War. One next to the other, you can see the U.S.S. Monitor and the U.S.S. Merrimac, the true protagonists of the famous battle of Hampton Roads, which took place in 1862, and also the first armored ships in history. 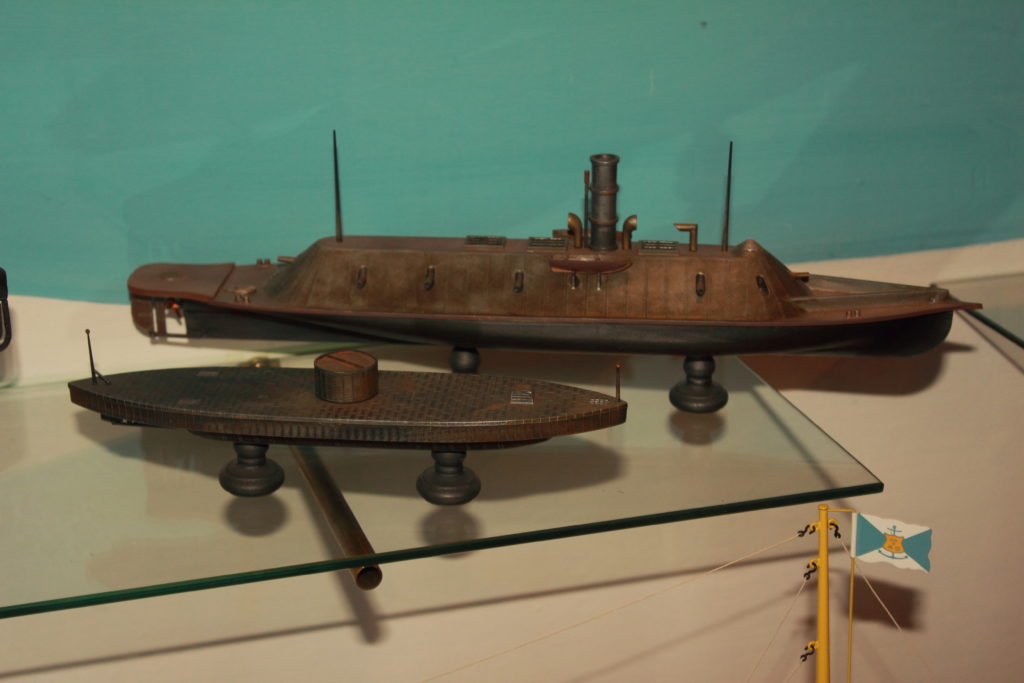 You can also see another of these kinds of ships, the U.S.S. Keokuk. This ship was considered to be ill-fated, because during  its first mission, the attack on the port of Charleston, was almost sunk by the southerners’ artillery. You can find a comprehensive study on these interesting events in the second part of the printed guide of Museo del Modellismo. 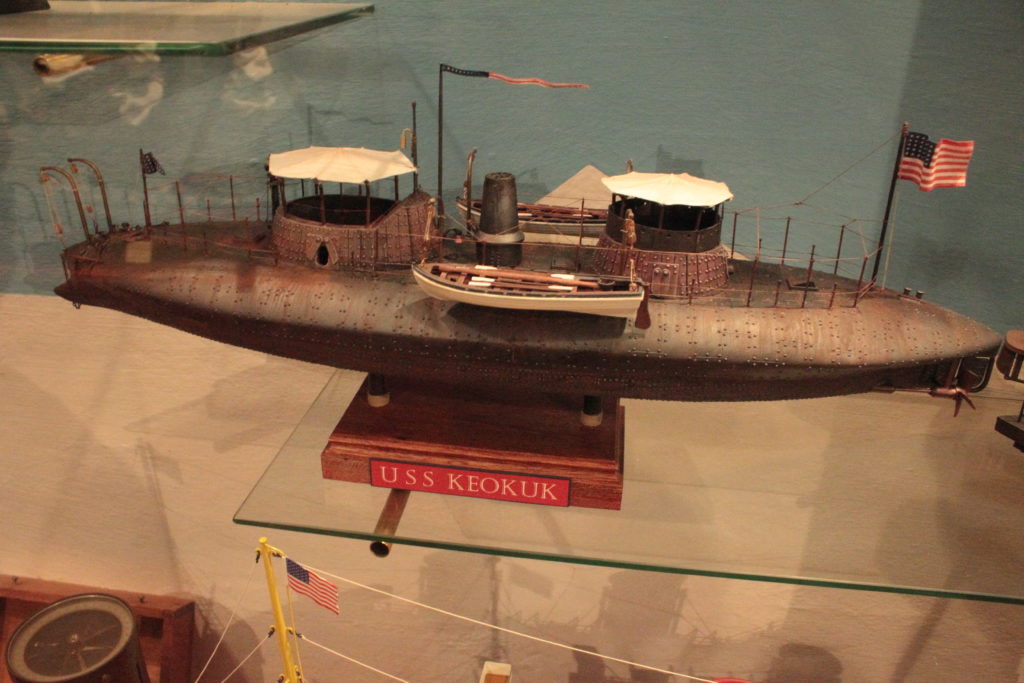 You can now see the Pioneer, Hunley’s first attempt to build a war machine that could travel invisible under water.

Next to it, you will find the namesake underwater boat: the Hunley. During its first mission, it was pushed into the water manually by a crew, and it had its first success in the submarine warfare history when it sank an enemy ship during the American Civil War.

Remaining on the submarine theme, look now at the strange wooden structure of the Ictineo, an underwater Spanish boat. Designed in 1856 by the engineer Narciso Monturiol, an utopian scientist, it was conceived not for war purposes but for collecting corals and studying the seabed.

It was propelled by a steam engine and had a very good efficiency and guaranteed good performances, but apparently it was not the right time for this boat: it was destroyed and the engines taken by a company that milled paper.

In the same showcase you can see the Krassìn or Krasìn, the Russian icebreaker that was able to reach the “Red Tent” and save the survivors of the airship “Italia”.The model is completely self-built based on the original drawings. This ship was designed to actually “sail”: if we added an electric motor, it could easily navigate the pond in the museum’s garden. 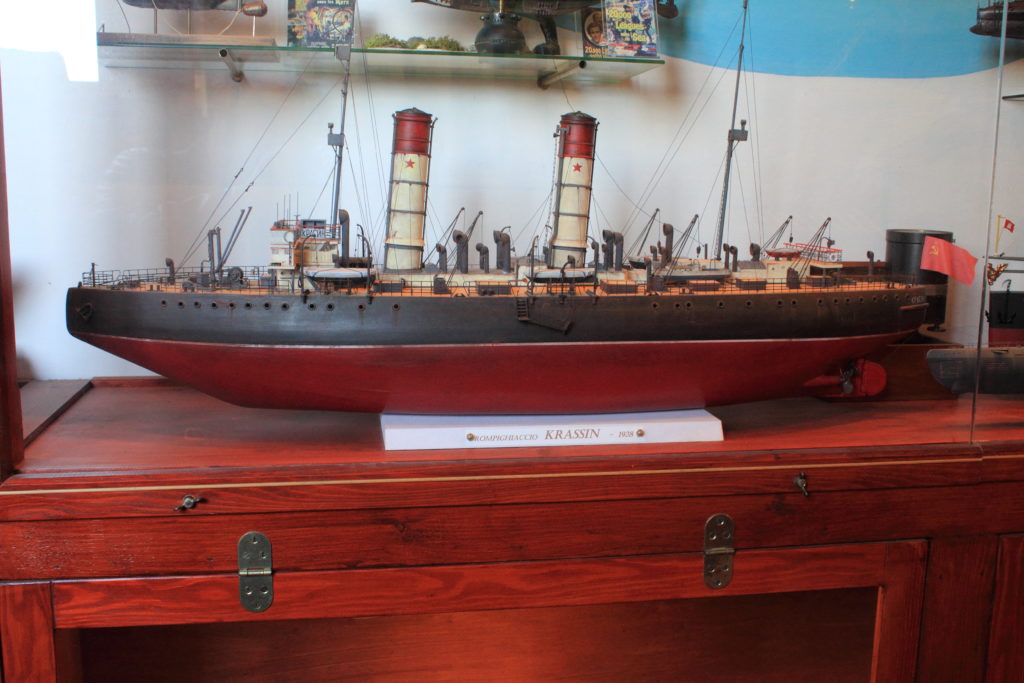 The last jewel of the room is An American motorboat for high-altitude racing. The wooden hull gives this model an old-fashioned charm, when technology did not have always to overpower beauty.